Odore Mio Babylon Perfume took inspiration in the Hanging Gardens of Babylon, one of the Seven Wonders of the Ancient World, described as a remarkable feat of engineering with an ascending series of tiered gardens containing a wide variety of trees, shrubs, and vines, built in the ancient city of Babylon.

Many legends describe this magnificent garden. According to one legend, the Hanging Gardens were built alongside a grand palace known as The Marvel of Mankind, by the Neo-Babylonian King Nebuchadnezzar II for his Median wife Queen Amytis, because she missed the green hills and valleys of her homeland. 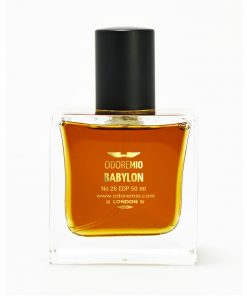